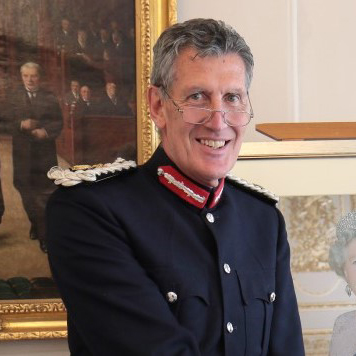 As I write this blog at the beginning of October, we will shortly be seeing the publication of the Queen’s Birthday Honours List, which of course normally comes out in June on the Queen’s Birthday. The delay has been to enable one or two additional honours to be included for the first of those to be recognised for the extraordinary work that they have done during the Covid-19 pandemic. We look forward to the release of the list which will honour a number of Devonians.

We still of course have the frustration of not having been able to present the British Empire Medals to those in Devon who received them in the New Years’ Honours 2020 which were released at the very beginning of this year. We continue to plan and then have to change our plans as government guidance on social distancing and suitable behaviour for public gatherings emerges. I hope that we will soon be able to present these awards which will again include Devonians who have set a very high standard in what they have achieved in their lives and for this county.

My deputies and I continue to receive reports of plenty of people who have helped in so many ways within the communities in which they live. We have tried to thank a number of them and to show how much the people in their communities appreciate the efforts that they have made to keep them safe and to help the elderly and vulnerable with their daily lives.

I did have the opportunity, however, to present the MBE to David Youle in County Hall in Exeter on the 21st September. We were a very small group as allowed by the regulations, but the ceremony was all the more intimate for that and it was wonderful to be able to thank and honour David for the voluntary and charitable work he has done in Devon, in the presence of his daughters and sons in law.

There are many people in the County who will have suffered greatly, either from the Covid-19 virus itself or from the consequences of it, whether it be on them or their families or their businesses or indeed the sports or other activities which they enjoy. Amongst those who may have missed the one opportunity they had to do something special; to lead an expedition, to captain a team or to fulfil some ambition of theirs, spare a thought for the Lord-Lieutenants cadets who are appointed annually and are chosen from a number of potential contenders from the cadets of the various units within Devon. Sadly, for them the year as not turned out to give them the opportunities to help and meet members of the Royal family and to help the Lord Lieutenant with presentations and visits. They are just a few of very many people whose lives have been changed in 2020.

Let us all hope for greater normality next year.

We must be thankful that, so far, Devon has escaped the worst impacts of Covid-19 although for some families it has already brought tragic consequences. More businesses are now open for business and tourists are flocking to the County taking advantage of the warm weather. We can only hope that they are following Government guidance to keep themselves and others safe.

In the Lieutenancy we continue to keep an eye out for exceptional activities taking place around the County so that I am able to brief the Queen and members of her family; thank some individuals on her behalf and encourage suitable nominations through the honours system.

During the telephone conversations that I arranged during lockdown which I mentioned in my last blog, I heard some inspiring stories including that of the firefighters who volunteered to drive ambulances to help the Ambulance service. When, subsequently, I heard from his office of a proposed visit by the Prince of Wales in July, I was able to point them to Middlemoor where he was able to express his thanks not only to some of those Devon and Somerset fire-fighters but also to members of the other blue light services- the SW Ambulance service and the Devon and Cornwall Constabulary. It was a hot day and so people were happy to stand 2 metres apart outside so that the rules could be followed!

Last week I chaired a virtual meeting of Lord Lieutenants from around the UK who met with the Queens Awards team within the Government Department that deals with business matters. We were discussing the Queen’s Award for Enterprise which is the most prestigious award that a business can win in one of the four categories available. Winners very often see an improvement in their business performance after winning one of these awards, but I recognise how difficult it will be for businesses to concentrate on this when they are more concerned with survival. Nevertheless, I hope that some businesses from Devon will apply particularly if it can then give them a boost as many of them will need it. This year we were delighted that 4 great Devon businesses were successful and won an award.

Devon has been a County with a low rate of unemployment in recent years but many of our businesses in the tourism and hospitality industry have been particularly vulnerable to Covid-19. There is a worry that some employees hitherto protected by the Government’s furlough scheme may find themselves unemployed before the year is out. I sincerely hope that this is kept to a minimum, but it will be important that we reach out to and support those who find themselves in this position. The volunteer ethos built up in the early days of the pandemic will continue to be needed I expect as we move forward.

Finally, I want to say a few words about VJ Day which we commemorate on Saturday 15th August.
While there will be events mainly organised by the Royal British Legion, taking place around Devon they will, for obvious reasons, be small and are carefully controlled. Fuller details are on this website. This is the 75th anniversary and it is sad that the big commemorations that were planned cannot now take place. As someone who knew a resident of our village who was a Chindit and whose father served in Burma at the end of the war and was President of a branch of the Burma Star Association towards the end of his life I realise what an important day this is.

I write as we are coming out of lockdown slowly and bit by bit. As the pressure eases on those who have been in the front line of the challenge of the last three or four months, I have taken the opportunity to speak to some of those who have borne the brunt of the administrative organisation and rearrangements in Devon. This has included some of the Chief Executives of the Local Authorities, hospitals and leaders in the emergency services. They have told me of the need for innovative ways of working, of staff going far beyond expectations in serving the people of Devon and of volunteers who have rallied round within communities to share the burden of helping the old, the vulnerable and the isolated in these difficult times.

I have talked to my deputies too, spread out over Devon, who have been able to tell me more about the wonderful team spirit engendered in towns and parishes alike. They have pointed out key individuals who have taken on a leadership role and groups that have stepped up or even been created specifically to co-ordinate new methods of support for others.

At a time of apparent disharmony in many aspects of international affairs it is heartening to see that here, closer to home, there remain visible the values of kindness, concern for others and creativity that bring us together. Often these are shown by the silent majority who do not do it for praise or recognition but because they think it is the right thing to do. I hope that we can all remember to thank them when the pandemic dies down or is overcome. We will need to thank too those in the front line who, regardless of the personal risk to themselves, have continued to support patients and their families and the wider public.

Some have lost friends, relatives, partners, spouses and others close to them to the virus. They have our deepest sympathy as do those whose other health issues have been affected. As we come out of our restrictions, we will see too the economic impact on the businesses in our County. Traditionally, in addition to well established businesses and brands, Devon has seen small start-up companies for example those associated with the Universities of Plymouth and Exeter. Many will not have developed the capital base to withstand the shocks that the pandemic has caused. Then there is the tourism industry for which we are renowned. In a year when the early summer was as good for tourism as it gets, visitors had to stay at home. Employment rates are sure to be impacted at least for a while.

So it is a challenging time but I am confident from what I have seen that the people of Devon will rise to the challenge as they have done before to get their lives and their businesses back on track and I wish them well in doing so.