The magnificent Sundial commemorating HM The Queens Diamond Jubilee received a blessing from the Right Reverend John Ford, the Bishop of Plymouth at a ceremony on Friday 17th August presided over by HM Lord Lieutenant, Mr Eric Dancer CBE JP and attended by dignitaries from across the County.

Appalling weather prevented guests from walking to the Sundial which is a gift to the Queen from the people of Devon and is permanently located at Roadford Lake Country Park courtesy of South West lakes Trust.

Also in attendance was the working party of Deputy Lieutenants who planned the project led by Sir John Cave Bt DL and representatives of Babcock International, who designed and fabricated the Sundial from a concept by sculptor Ben Jones, and Midas Construction who project managed and installed the structure on the shores of the North Devon reservoir.

Sir John Cave said: “A huge amount of thought went into this.  For the Golden Jubilee, we presented Her Majesty with an orchard of Devon apple trees which was planted at Sandringham. For the Diamond Jubilee we wanted to create something very striking and that people could visit and that showed off the skills of Devon based companies and using some natural Devon materials.

This unique gift to The Queen stands almost 5.8 at the highest point of the gnomon which is 5 metre long on a base of 6 metres.  The six stainless steel piece of the gnomon represent the six decades of Her Majesty’s reign and they are surrounded by granite time pieces taken from the site of the reservoir prior to it being flooded.

The project was funded by the Lieutenancy, Devon Businesses, Devon Associations and some Local Authorities.  The actual cost will remain discrete because it is a gift to The Queen.

The Lord Lieutenant, Eric Dancer said: “In these difficult times, I have been amazed by the generosity of those who have contributed both financially and in kind, to achieve this splendid landmark.” 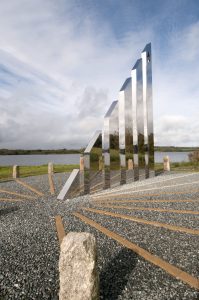