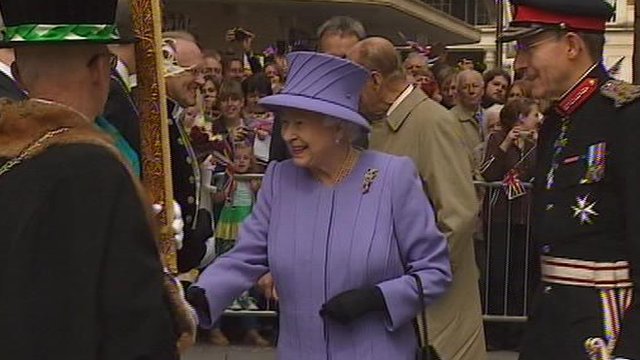 CROWDS of people lined the city centre streets to welcome the Queen as part of her Diamond Jubilee celebration.

Her Majesty and His Royal Highness, The Duke of Edinburgh, visited Exeter on Wednesday, May 2, during a tour of the South West.

The Royal couple visited Princesshay 63 years after Her Majesty officially named the area. They then travelled to the University of Exeter to mark the official opening of the new Forum development.

The Queen and Prince Philip arrived in Princesshay at 1200. A series of dance and musical performances took place in the main square from 9am to entertain people as they wait to welcome the Royal visitors. There was also an exhibition depicting Princess-hay’s regeneration and a display of photographs of Her Majesty the Queen’s previous visits to the city as well as a performance by Exeter College students. The Queen and Prince Philip then met a group of local residents who witnessed the visit of HRH Princess Elizabeth to inaugurate the post-war Princesshay redevelopment.

The visit continued on to the university where the Royals met ‘Unsung Heroes’ from Devon and Cornwall chosen from Devon’s voluntary organisations, the arts, military, faith groups, health and education; and from Cornwall’s creative, renewable energy, and modern communications sectors. They then attended the opening ceremony for the new £48m Forum development where the Queen unveiled a plaque to officially open the new university development. Approximately 270 guests, including ‘unsung heroes’ from Devon and Cornwall joined the Queen and Prince Philip for lunch.